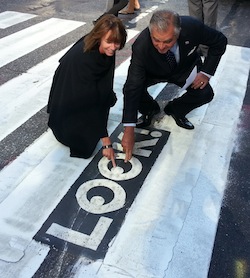 Oftentimes, pedestrian-versus-car accident cases are among the toughest to litigate. It’s rare that we see that perfect liability scenario:

The pedestrian, observed by traffic cameras, dutifully waited her turn to cross from one end of the street to the other. The approaching traffic stopped, she got the white “walking man” signal, and after looking both ways, she proceeded across the cross walk to the other end. At that point, the independent and disinterested witness observed, the defendant ran the red light at twice the speed limit, hitting the pedestrian.”

The pedestrian, unobserved by anyone or anything, was crossing the road in the middle of the street, about 20 yards from the crosswalk. He said there was no traffic approaching at the time. When he was about 2 feet from the opposite curb, he felt the impact from a vehicle that “just came out of nowhere.” Of course, he was listening to iPod at the time of the collision.

The reality is, in a state like Maryland where contributory negligence is the order of the day, plaintiff pedestrians probably lose 75% of the time (yes, this is a completely off-the-cuff and made-up-on-the-spot statistic). And, lawyers won’t even take the really unlikely case. Contributory negligence is the rule that says, even if the defendant driver is 99.99% negligent, a plaintiff must lose his entire case if he is 0.01% negligent (we’re hoping the Court of Appeals might change this arcane rule of law soon).

U.S. Secretary of Transportation Ray LaHood said recently that 80% of pedestrian deaths in 2010 were due to jaywalking. A little research indicates that 79% of pedestrian deaths were at “non-intersections.” Not quite the same as jaywalking, and not quite the same as “caused by.” As the article states, sometimes there is no crosswalk anywhere in the area; sometimes cars jump curbs and kill people at “non-intersections.”

Of course, this is all largely irrelevant. The important point that Lahood wanted to make is that pedestrians should pay attention to traffic, not their cell phones, when crossing the street. Surely that’s going to save a couple of lives.