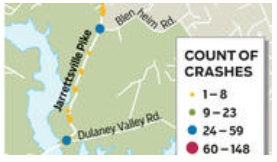 Motorists injured on Jarrettsville Pike may have an automobile accident claim against negligent motorists. In the right case, though, they may have a claim for defective roadway design against the government. That lawsuit will happen when someone is injured or killed in an auto collision, and the other negligent driver has insufficient insurance coverage to pay the claim. Maybe that’s what it’s going to take for change.