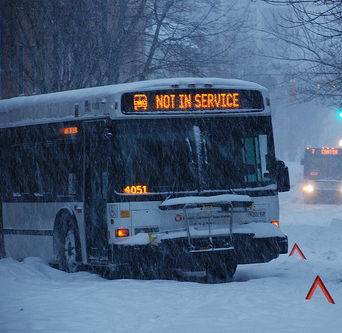 When I go into court, now I prepare Trial Memoranda to give to the judge, with copies of caselaw, to make sure that the judge is aware of the law on any issue on which the outcome could hinge (and to make sure the record is clear if I need to appeal the case). A few weeks ago I had one such case. Here’s the story.

My client was stepping onto a bus. The bus driver refused to lower the bus (they have pneumatic mechanisms to help injured or disabled people get on so the steps are not so high). It was icy out, and my client was afraid of falling. After asking the driver twice, and being twice refused, my client attempted to board the bus and fell.

In Maryland, taxis and buses are known as “common carriers.” Common carriers have a higher duty of care than the rest of us. I needed the judge to know that, in this case, the bus driver had a higher duty of care toward my client. I couldn’t assume that the judge knew it, particularly where my client had not even completely boarded the bus. So I submitted a trial memoranda, which the judge read while on the bench. In his ruling, he specifically noted that he also read one of the cases I cited in the memoranda, and that I was correct. Maybe he would have gotten the law right on his own–he’s a smart judge. But maybe not, and I didn’t want to take the chance.

If you are interested, here are the main points of the memo. When you go into trial, make sure your lawyer is prepared for the unexpected–ask what research he or she is going to give the judge.

Common Carriers Have A Heightened Duty To Provide Safe Entrance for Their Passengers.

It is axiomatic that common carriers, including commercial buses, taxi cabs and trains, have a heightened duty to their passengers. A common carrier: “…must employ the utmost care and diligence which human foresight can use. It is required to use the utmost degree of care, skill, and diligence in everything that concerns its passengers’ transportation but is extended further and requires the carrier to provide a safe means to enter and exit the bus.” Leatherwood Motor Coach Tours Corp. v. Nathan, 84 Md.App. 370, 376 (1990) (emphasis added).

Maryland courts have defined passengers, to whom this heightened duty of care is owed: “[a] person becomes a passenger when, with the implied consent of the carrier, the person enters upon the bus, but actual entry upon the bus is not necessary to create a relationship of carrier and passenger in which one may become a passenger.” Leatherwood, 84 Md.App. at 375-376. Further, “the duty begins when a passenger who has paid his fare or a prospective passenger intending to do so starts to enter upon the conveyance or upon the carrier’s station, platform, waiting room, or other facility maintained by the carrier for the passage and convenience of its passengers….” Leatherwood, 84 Md.App. at 379 (emphasis added).

Common carriers that pick up or drop off passengers must ensure that the location selected by the driver is reasonably safe. In Baltimore Transit Co. v. Brooks, the plaintiff alleged that the driver of a trackless trolley stopped directly in front of an isolated patch of sheet ice, which the plaintiff stepped on when exiting the vehicle. 224 Md. 242 (1961). The plaintiff prevailed at trial, and the Court of Appeals agreed that the case was properly submitted to the jury to determine “whether the driver either saw, or in the exercise of the care required of him for his passenger about to leave the vehicle, should have seen the relatively large sheet of ice, and either driven onto it so the plaintiff could have stepped on the dry pavement, or have stopped short of it on the dry street.” Baltimore Transit Co., 224 Md. at 245.