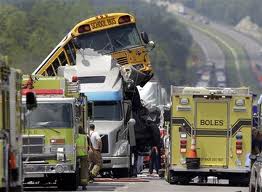 I’ve wondered this question ever since grade school. Back then, we didn’t have to wear seatbelts, but I remember dutifully doing so and chastising my parents when they didn’t (probably something we learned in school). In Maryland, we weren’t required to wear seatbelts until July 1986, and that was only for front seat passengers.

Buses were always an anomaly. School buses and commuter buses alike had no seatbelts. Even worse, you are allowed to stand up on commuter buses. There’s a bit of a bias against commuter bus accident victims (probably stemming from the stories we all hear about people rushing onto a bus after an accident to try to get a piece of the insurance pie); but common sense suggests that bus passengers, not tethered to their seats, may very well sustain more injuries. If not, then what are seatbelts for?

We’ve been told by our safety leaders that school buses are safe because of the design of the seats–they are well anchored, padded and high enough so that injuries are rare. Essentially, our children are compartmentalized to prevent injury. These improvements were a result of a UCLA study from about 35 years ago. However, that study also recommended the following that have never been implemented:

Why are lap belts and side panels important? The main reason is obvious–not all collisions are rear-enders. If a truck comes out of a side street and t-bones my child’s school bus, my child is going to move to the side, possibly fall into the aisle and onto the bus floor. If the bus rolls over on its side, my child will be propelled into the air. That’s not safety.

Of course, that’s not what the National Highway Traffic Safety Administration (NHTSA) would have you believe. For some reason, the same group that advocates a ban on all cell phones in vehicles can’t even make gentle strides in bus safety. In 2002 the NHTSA issued a report. That report notes the high cost to schools (and taxpayers) of requiring changes 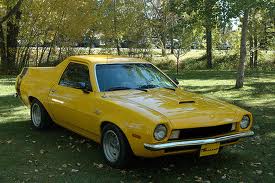 to our busing fleets. Maybe we should just send our kids to school in Ford Pintos–that might be cheaper, too. The report mentions that lap belts wouldn’t make our kids much safer:

An analysis of test data by the National Highway Traffic Safety Administration (NHTSA) has concluded that lap belts appear to have little, if any, benefit in reducing serious-to-fatal injuries in severe frontal crashes.

Detractors note that children can’t be relied on to properly use seatbelts. Even if that were the case, I best most would. Or, maybe we don’t use seatbelts. What about those capsules with the downward bar that protects passengers on roller coaster rides? I bet an aspiring engineer could create an inexpensive device to accomplish just that. The point is, our children are not as safe as they could be. And this says nothing about commuter buses, some of which have sideways seats, and most of which are lacking in the protective cushioning of school buses…