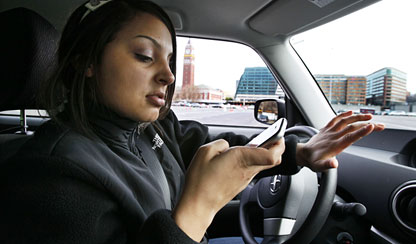 The Federal government wants to know whether you’ve been texting and driving. They have authorized grants to two states, Connecticut and Massachusetts, for anti-texting enforcement programs. Each state will get $275,000.00.

This money will be used to train police officers on how to detect texters–not only from their patrol cars, but from highway overpasses and more covert locations. I’m not sure how this will work, exactly. One police officer on a bridge, watching traffic come toward him. That officer radios to another officer on the road below, and tells him which car to pull over. Maybe it’s as simple as that.

One thing is for sure–some people who flaunt Maryland’s cell phone use laws are getting crafty–many keep the phones down below window-level to avoid police detection. Of course, that makes it harder to see the road, which is more likely to cause crashes.

Maryland automobile accident lawyers should have an arsenal of discovery ready to determine when illegal cell phone use may have contributed to an accident. In some cases, this involves written questions, requests for production of cell phone records, and subpoenas to cell phone companies.